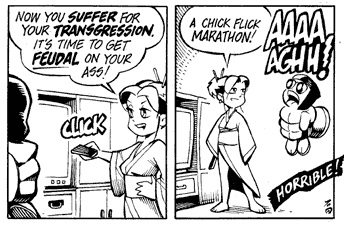 There comes a time in every adventure show when the hero must face torture. But beating and whipping is really dull for any self-respecting criminal mastermind. And more importantly, really dull for the audience, unless it's done so gruesomely that the Media Watchdogs complain.

Besides, why beat the hero when you can torture him with the most horrible thing in the universe... six hours of opera (Scare Chord)! Or six hours of laxative commercials, or six hours of the Ice Capades. Basically anything so bad that the Suckiness Is Painful. It would make anyone confess.

A variant is for the villain to do torture that is so ridiculous it would never work, but everyone acts as if it would.

Occasionally, one character is immune due to having weird tastes and, thus, actually enjoying the "punishment".

Typically, the form of punishment may be introduced as being harmless, only to be quickly revealed to be the opposite.

This is used most often in shows for kids, where showing the application of real torture methods would get the parents up in arms—especially when they find that they can't sleep afterward. Better to employ something ridiculous.

Promethean Punishment is when this happens to give the sufferer super powers. ...why do people do this?

When the Cool and Unusual Punishment is loud music or annoying sounds, the trope is Loud of War. See also Tickle Torture.

May serve as a Take That. For when someone merely threatens to do something like this, see Cut His Heart Out with a Spoon. Compare Cruel Mercy and Mundane Afterlife. Contrast Poke the Poodle. When this involves sending somebody to a city, see Place Worse Than Death. Frequently follows the stock phrase "We Have Ways of Making You Talk!". Contrast Unishment.

Examples of Cool and Unusual Punishment include:

Retrieved from "https://allthetropes.org/w/index.php?title=Cool_and_Unusual_Punishment&oldid=1966083"
Categories:
Cookies help us deliver our services. By using our services, you agree to our use of cookies.