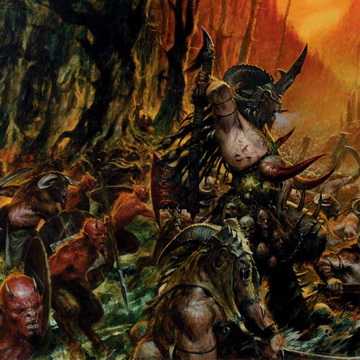 They come sweeping down from the mountains (or the deep forest) to Rape, Pillage and Burn, howling like death itself, and leaving only destruction and despair in their wake. They waylay travelers, ransack entire peasant villages, and sometimes even threaten entire cities. They take only what they can carry, and usually torch the rest.

The third standard fantasy government, besides The Empire and The Kingdom: A large group of barbaric or beastly warriors, bound together solely through either tribal ties (if disorganized), or the will of the Evil Overlord (if organized). Like the Proud Warrior Race Guy, they value strength above all else, but are usually not as honorable. Their leader is usually the strongest, toughest, and/or most vicious or cunning of the group. This is often because the most common way to advance up the ranks is through a Klingon Promotion.

Often part of the Fantasy Axis of Evil. Compare The Usual Adversaries.

Examples of The Horde include:

Retrieved from "https://allthetropes.org/w/index.php?title=The_Horde&oldid=1586902"
Categories:
Cookies help us deliver our services. By using our services, you agree to our use of cookies.