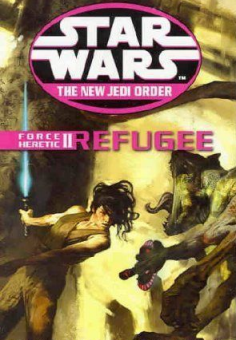 New Jedi Order is a Star Wars Expanded Universe series set twenty-five years after Star Wars Episode IV: A New Hope. The galaxy is at peace. The Rebellion has become the New Republic. The Empire is reduced to a shadow of its former self, its surviving leaders much more reasonable (still authoritarian but not outright dictatorial), and a treaty exists between the Empire and the Republic. Luke Skywalker's new Jedi Order is still small, but growing--about a hundred all told. He also got married four years ago to a wonderful woman, also a Jedi and who happens to have once wanted to kill him. Their courtship was adorable. Han Solo and Leia Organa have been hitched for seventeen years, and have three teenaged children, all prodigies and strong in the Force.

Then the Yuuzhan Vong come, at first on a small scale in the form of weird biological ships, carrying warriors that scar and tattoo and mutilate themselves, attack a few nothing worlds on the edge of known space. They're turned back, but then more come, and more, enough to conquer a galaxy, it seems. Fearless and fanatical, they crusade against the infidels and their machines and all of them, seemingly, do not exist in the Force. In their numbers and philosophy and ferocity they promise to take a greater toll than the entire Galactic Civil War.

And then things get really bad.

The New Jedi Order was the first novel series Del Rey Books produced once they acquired the license to produce Star Wars Expanded Universe novels from Lucasbooks after Bantam lost it. Originally intended to have twenty-five books, it ended up as a still-sprawling nineteen-book series over five years of both in-universe time and real time, composed mostly of hardcover one-shots and softcover miniseries, written by several authors. It was embroiled in controversy from the start, with the killing of a major movie character--one of the seven characters to appear in all three movies of the original trilogy and survive.[1] It continued by killing a small host of minor, secondary, and non-movie major characters, including several fan-favorites, and ended up exploring the very meaning of the Force, and whether the Dark Side existed at all. (Short answer: Not really. Long answer: Yes, but not previously thought.) The published novels are in chronological order as follows (hardcovers with a indentation, softcovers with two, even though they aren't necessarily direct sequels).

The series also featured several short stories and e-book novellas set in the duration. These include:

Additional stories set during this era, but not published concurrently with the series include:

The series is considered polarizing. A lot of old school Expanded Universe fans hate it, while a lot of new Expanded Universe Fans love it. Aspects of the series that have drawn criticism include the role of extragalactic invaders who cannot be detected in the Force as antagonists instead of the old, dependable Imperial and Sith stand-bys and the perceived discrepancies in the characterization of pre-existing characters, the rather high death rate of pre-existing characters, and the noticeably uneven feel produced by so many writers working on one project. However, other fans enjoy the series for examining aspects of the Star Wars Universe and for providing fresh antagonists and a plot that wasn't simply a rehash of the movies or other EU works..

Tropes used in New Jedi Order include:
Retrieved from "https://allthetropes.org/w/index.php?title=New_Jedi_Order&oldid=1762113"
Categories:
Cookies help us deliver our services. By using our services, you agree to our use of cookies.