The Wonderful Wizard of Oz 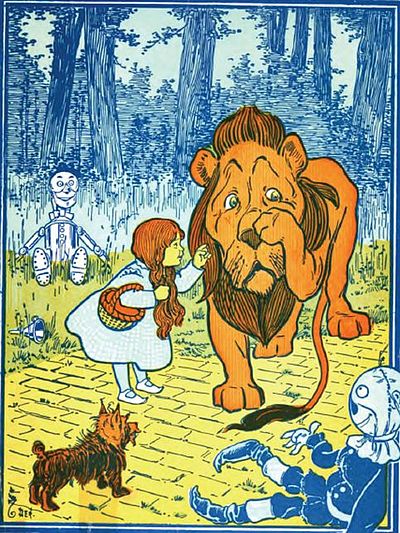 Dorothy, the Scarecrow, and the Tin-Woodman, meet the Cowardly Lion.

The Wonderful Wizard of Oz, written by Lyman (long for "L.") Frank Baum in 1900, was an instant success, which has been much homaged and parodied, though the 1939 movie version, The Wizard of Oz, may now be better known. Return to Oz, a semi-sequel released in 1985 by Disney, is a cult movie. Many viewers feel that the latter film captures the spirit of the books more than its MGM predecessor does; it certainly looks far more like the books' original illustrations.

The book itself had many sequels; for more about these, see Land of Oz.

Dorothy Gale is a little girl from Kansas whose farmhouse is carried away to Oz by a random tornado, with her and her dog Toto inside. The tornado drops the house on the Wicked Witch of the East, killing her. Dorothy is quickly feted by the native Munchkins as a hero, but wants nothing more than to get home. The (un-named) Good Witch of the North is sympathetic, but unfortunately has never heard of this strange place called "Kansas". So she gives Dorothy the wicked witch's silver shoes, kisses her on the forehead, and sends her off to the capital -- the Emerald City -- to ask the Wizard who rules there for his advice.

Along the way, Dorothy meets the Scarecrow (who wants a brain), the Tin Woodman (who misses his heart) and the Cowardly Lion (who wishes he had courage). Together they travel to the Emerald City to ask for the Wizard's help - having to deal along the way with the aptly named Wicked Witch of the West, who wants revenge for the death of her sister - as well as her magical silver shoes.

Although the basic story is close to that of the film, there are several deviations and extra parts - such as the history of the Tin Woodman, the Wizard's multiple disguises, the fact that there are two Good Witches rather than just one, an extended anticlimactic journey after the defeat of the Wicked Witch, and (most significantly) the ending, which in the movie implied it was All Just a Dream, while in the book it is all most definitely real.

The story is public domain, and can be read in its entirety here.

For a list of the many, many adaptations, see The Wizard of Oz.