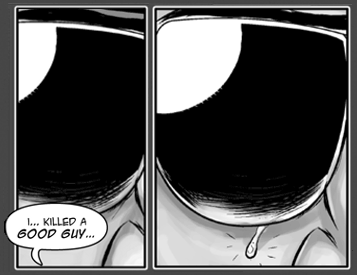 What we had here was a failure to communicate.

Perhaps you have had a Heel Realization, perhaps you are Dying as Yourself and just learned the enormity of your deeds, perhaps you have learned that the deed you sought Revenge for was fully justified, but you have already killed the character, perhaps you have failed, perhaps a character has died, and you can never make reparation for something you did (perhaps contributing to the death, or perhaps not) -- and there is nothing for it but to cry your eyes out, it was so horrible. (Or shed a Single Tear.)

A Sub-Trope of My God, What Have I Done?. Common in Villainous BSOD—though Ignored Epiphany can still ensue. Fighting From the Inside may evince these, even illogically, if the character could not have prevented the control.

May be a form of Manly Tears. Tender Tears combine when they are grief-stricken by minor injuries to others. Note that crying because you didn't get away with it is Water Works.

Examples of Tears of Remorse include:

Retrieved from "https://allthetropes.org/w/index.php?title=Tears_of_Remorse&oldid=1704486"
Categories:
Cookies help us deliver our services. By using our services, you agree to our use of cookies.