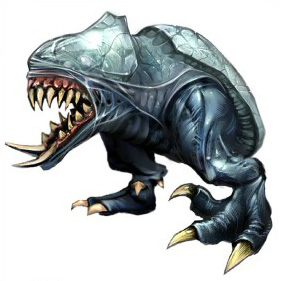 A creature with two legs but no wings or arms. May be used to make a creature look more alien, as the form is anthropomorphic yet easily falls into the Uncanny Valley. Or they make something appear harmless until it's too late. They can also be used to stylistic effect for cartoons with less realistic character designs.

While armless, such creatures may not be harmless (if you'll excuse the rhyme): They may still have a dangerous bite, kick or tail-whip/sting, or may have psychic or magical abilities.

Note that examples only count as this for species that naturally lack arms. That is, humans and other races that normally have them don't count just because of injury or a birth defect that caused them to be born without them.

Waddling Head is this minus a torso. May result in Invisible Anatomy.

Examples of Armless Biped include: