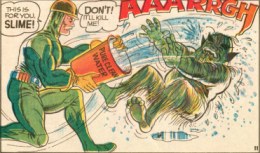 Being a Superhero ain't easy. Most of the original Flying Bricks have the good Achilles heels covered, and the pharmacy is even out of Psycho Serum to give you a cheap Backstory gimmick to explain your powers.

What's left for the modern hero and villain to do? Make do with a Weaksauce Weakness. It's great for comedic effect, but just as often it ends up being an Achilles' Heel that makes your average Mundane Solution seem perfectly reasonable by comparison.

The weakness isn't a common household cleaning agent like Mundane Solution, but something so incredibly, stupidly embarrassing you'd think the Superhero would never use his power out of shame in the off chance someone found out about it, or because it shows up regularly in the course of their super heroing. The "weakness" might come in the form of the fuel for the super power, a humiliating Transformation Sequence or activation phrase, or just a set of restrictions on the powers that really are begging to get laughed at. Therefore, this is one of the most popular ways to Bless your hero With Suck.

If the weakness is a Logical Weakness, it can be pulled off. If not, it can seriously stress the Willing Suspension of Disbelief, unless it's Played for Laughs.

Especially cruel writers will have clever villains make it a Weaponized Weakness. However, a Kryptonite-Proof Suit can even the odds.

Related to Why Did It Have to Be Snakes?. See also Weakened by the Light, Kryptonite Factor and Easily-Thwarted Alien Invasion (where Bizarre Alien Biology is probably to blame). If played for laughs, the one so harmed may Fight Off the Kryptonite. In extreme cases, the character will defend themselves from the weakness with a Cross-Melting Aura. For the inversion, of being at risk from a lack of something see: Phlebotinum Muncher.

Examples of Weaksauce Weakness include:

The multitude of fiction involving vampires, though, has led to a multitude of differing weaknesses—including varying degrees of effectiveness. In some settings, vampires are weak to silver, and other religious symbols affect them as much as Christian ones. Then there's the older, more obscure, and even more restrictive weaknesses such as inability to cross running water, or obsessive-compulsive disorder causing the need to count piles of beans or other small objects, inability to stand constant bell ringing, and even the need to be invited to enter houses.
On the inverse, many of the works that tend toward "non-standard" portrayals of vampires also go at length to mock the traditional weaknesses.

A popular explanation for the weakness comes from Victorian Era archaeologists, who held that this is all just symbolism for the bronze and stone-working cultures being conquered by iron-working ones. More recent academics (like Dr. Diane Purkiss) have shown there's no archaeological or historical evidence for this.

The popular weakness to silver is a relatively new invention. It often comes with an immunity to anything not made of silver. Most werewolves that don't have the silver weakness can be killed by any type of weapon, including silver.

In some legends, Basilisks are also weak to themselves. There are stories of men killing a basilisk by wearing mirrors sewn into clothing.

One good way to trick a troll into watching the sunrise is to challenge them to a game of riddles: no troll can resist such a challenge. But beware—according to the legends trolls are extremely good at riddles, and if you decide to give up before dawn then they celebrate their victory by eating the loser.

Nightmare: Aaaah! How did Kirby discover the secret?! That pitiful little Star Warrior has found my only weakness! I am helpless against the power of the Star Rod! WAAAAUUUUGGGGHHH!!!!

"Sounds like the deal of the century, Flipper! And everyone says I'm the crazy-"

Megamind: Your weakness is copper!? You're kidding, right?

Hooktail: Bleck! That awful sound! It... sounds like a cricket! How did you know?

The Tick: "And that's just it, Doc - my mind has always been my Achilles' heel!"