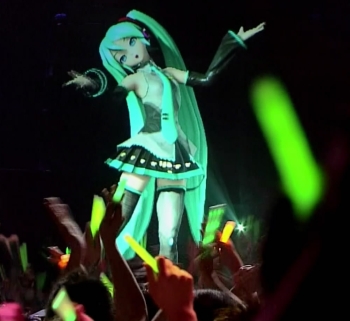 So there's this new performer taking the entertainment world by storm. She's gorgeous, she's talented, she's got tons of fans... and she's not real. Well, not a flesh-and-blood human, anyway (whether that makes her not real is sometimes debatable). She's some sort of program or AI, created specifically to be an actor, Idol Singer, or what have you. Most often her artificial nature will be concealed from the world, though there's the occasional Cyberpunk or Post Cyber Punk setting where celebrities (sometimes, all celebrities, or at least the majority) are known to be virtual and nobody cares.

Any metaphors occurring to you about how celebrities are manufactured and marketed as products? Don't be such a cynic.

These do exist in reality; they usually either have a Kayfabe while clearly being fictional, or are openly marketed as virtual celebrities for the sake of a gimmick, but at least one (Aimi Eguchi) had been sucessfully passed off as a real person.

Not to be confused with Synthetic Voice Actor. Compare Reused Character Design.

Examples of Virtual Celebrity include:

Retrieved from "https://allthetropes.org/w/index.php?title=Virtual_Celebrity&oldid=1644912"
Categories:
Cookies help us deliver our services. By using our services, you agree to our use of cookies.