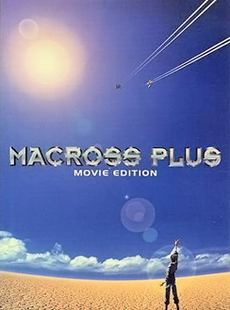 All you gotta do is cut the engines and ride the wind...

The first official sequel to Super Dimension Fortress Macross, Macross Plus is a four episode OVA series released for the tenth anniversary of the series, and a theatrical movie released the following year, which added around 20 minutes of new animation, particularly during the climactic battle at the end of the story.

Macross Plus forgoes the background of interstellar war present in the rest of the franchise for a more personal story based on the rivalry of two childhood friends, Isamu Alva Dyson and Guld Goa Bowman, both in their work as test pilots for the latest variable fighters and in the central Love Triangle with their mutual friend Myung Fang Lone, as well as facing the obsolescence of manned pilots against artificial intelligence guided unmanned fighting craft.

The animation consisted of a then groundbreaking combination of traditional cel animation and computer animation, and paved the way for much greater integration of CGI in Japanese animation. It also launched the directorial career of Shinichiro Watanabe. To this date it is still widely regarded as the pinnacle of the Macross franchise and one of the finest sci-fi anime ever made.

Tropes used in Macross Plus include:

Retrieved from "https://allthetropes.org/w/index.php?title=Macross_Plus&oldid=1962783"
Categories:
Cookies help us deliver our services. By using our services, you agree to our use of cookies.