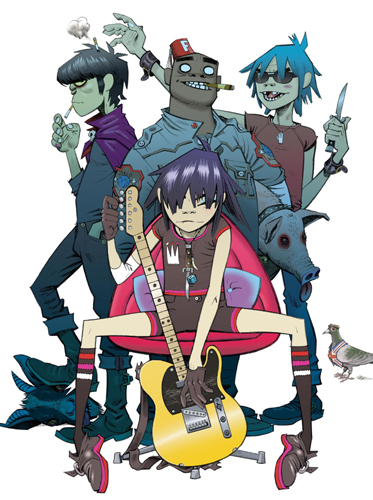 Gorillaz is a virtual Trip-Hop band created by Damon Albarn of the alternative band Blur and Tank Girl creator Jamie Hewlett, who are the only two constant contributors to the project. The band itself is made up of four fictional characters, 2D/ Stuart Pot (speaking voice Nelson de Freitas; singing voice Damon himself), Murdoc Niccals (Phil Cornwell), Russel Hobbs (Remi Kabaka) and Noodle (speaking voice Haruka Kuroda; singing voice on the first album by Miho Hatori and Tina Weymouth). The real people behind Gorillaz stay behind the scenes, and the characters appear to be the real band, acting in music videos and giving interviews. The virtual band was created as a commentary on MTV; on how there is often more of an emphasis on the musician than the music itself. So in creating a detailed fictional backstory and putting so much emphasis on the cartoons, they are proving their point.

The band is essentially a Trip-Hop band, but their music also combines other genres such as Alternative Rock, Hip Hop, Reggae, Electronic Music, Punk Rock and Pop. Some of their more well known songs include "Clint Eastwood," "19/2000,", "Feel Good Inc.", "Dare" and "Stylo".

So far, the band has released three albums: 2001's Gorillaz, 2005's Demon Days and 2010's Plastic Beach, along with the B-sides of "Gorillaz" and "Demon Days", named "G-Sides" and "D-Sides" respectively. A fourth album, The Fall, was released on Christmas Day 2010, and can be streamed for free here. The story of Gorillaz was largely pieced together from interviews and promo materials until it was brought together in their biography, Rise of the Ogre. So now that we've got their story straight, we can begin to rip it apart for tropes.

As the most successful virtual band, they have a lot of awesome music. See their Awesome Music Page here. The Gorillaz have become the most recognizable and well known Trip-Hop group, all without ever existing.

An interview with Damon Albarn in April 2012 states that he and Jamie Hewlett are done with the project. It didn't stick - they were back together in 2015, and are still performing as of 2020.

Now with a Character Sheet!

Strangely enough, it doesn't take any time at all to make the trip back up... But M.C. Escher apparently designed the stairs, so who knows.

Retrieved from "https://allthetropes.org/w/index.php?title=Gorillaz&oldid=1818152"
Categories:
Cookies help us deliver our services. By using our services, you agree to our use of cookies.