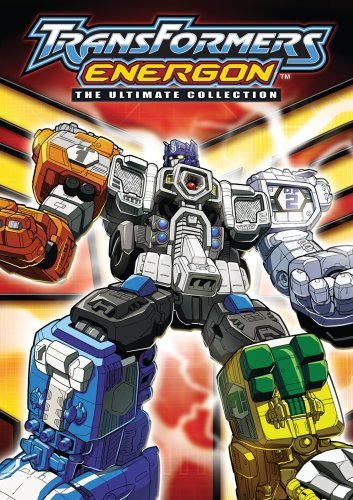 The sequel to Transformers Armada, Transformers Energon (Transformers Superlink in Japan) was concerned with the search for energon, the source of both Cybertronian factions' power. Although previous series had followed the integral plot of Autobots and Decepticons searching for energy, Energon was quite heavily obsessed with it.

The show begins with Cybertronians living on Earth with humans and on the lookout for more energy. Although Megatron is supposedly dead and the Decepticons and Autobots are allies, an undercurrent of shakiness pervades the Autobot cities. Meanwhile, deep inside all that remains of Unicron, the planet-sized Transformer, sits Alpha Q, prince of an ancient planet that was eaten by Unicron in ages past. Alpha Q plans to re-activate Unicron to recreate his own planet (Unicron can do that in Energon) and so sends out Terrorcons to find energy to power Unicron. They immediately head for Earth, and while the Autobots and Decepticons battle the Terrorcons, an old enemy lurks in the distance...

The series-wide gimmick was 'energon stars', little translucent plastic things that slotted into holes on the Transformers. The star acted as a magnifying glass, revealing a faction sigil at the bottom of the hole.

In addition, most of the Autobots took the form of combining toys, which the show called Powerlinxing. In most cases, one robot formed the head, arms, and torso, while a second formed the legs and abdomen in a manner reminiscent of Victory's Multiforce. In-story, it was explained that this made the combined bots 10 times more powerful.

One episode, "Distribution," was meant to commemorate the 500th episode of Transformers. However, it was aired as a special in Japan, non-canon to the actual plot.

Unfortunately, the anime series received intense flak from Transformers cultist fandom for its painfully mangled translation (following Never Say "Die" rules worsened it even further), filled in dead air the dub failed to cover with stock phrases or pointless confused groans, low-caliber CGI renders of the Transformers that rarely emoted beyond Dull Surprise, excess Padding, and the fact that the US dub was so rushed, the copies of the episodes aired in the states weren't even finished yet and a major episode plot-wise was skipped, replaced by the non-canon special at a completely absurd moment in the series. Naturally, the fans made the migraine-inducing reaction they always have: Ruined FOREVER. The point being, that if you want to watch the show in a coherent form, seek out the complete animation-wise Japanese version of Superlink with subtitles, available here.

Tropes used in Transformers Energon include:

Retrieved from "https://allthetropes.org/w/index.php?title=Transformers_Energon&oldid=1663943"
Categories:
Cookies help us deliver our services. By using our services, you agree to our use of cookies.