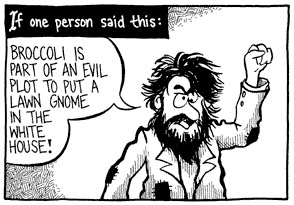 A Windmill is a quite different creature from its distant cousin, the Strawman.

While a Strawman is a dumbed-down effigy of a real enemy or similar, a Windmill is not a real target at all. There is no real threat, and it might not even be capable of returning the animosity. The windmill doesn’t even have to exist to be efficient; much less does it have to consist of actual human beings. On the contrary: If they don't exist, then they can't deny the vicious accusations you raise against them.

There are at least three kinds of characters who are likely to lead the charge in a battle against windmills, but for very different reasons:

Compare Gravity Is Only a Theory and Dead Unicorn Trope. Contrast with No Mere Windmill for something that is not a windmill but gets mistaken for one.

Compare and contrast The Scapegoat: This character gets wrongly blamed for a real problem, while a windmill gets blamed for a problem that isn't real in itself - but might be used to explain away a real problem. For example, the Nazi attitude towards the Jews was two levels of scapegoat with one level of windmill in between. Ordinary Jewish citizens got blamed for the evil actions of the non-existent "global Jewish conspiracy", and that conspiracy was in turn given the blame for why Germany lost the previous war.

No real life examples, please; While there are some people with views so extreme it's hard to believe they're not a joke, this is not the place to settle what threats are real and what threats are windmills. Stick to how Windmills are portrayed. If we don't, the windmills are going to come and take away our children in the night.

Examples of Windmill Political include:

Retrieved from "https://allthetropes.org/w/index.php?title=Windmill_Political&oldid=1901680"
Categories:
Cookies help us deliver our services. By using our services, you agree to our use of cookies.