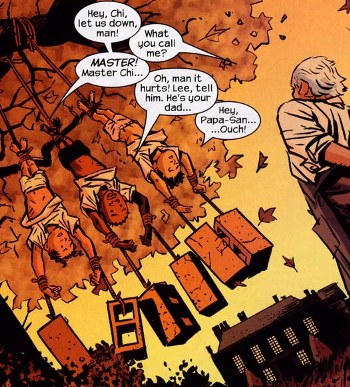 Characters in fighting, sports, and other My Kung Fu Is Stronger Than Yours series have a tendency to go to extremes when doing their training. Whether it's a regimen concocted by a harsh (or just sadistic) mentor, or self-inflicted, expect to see our heroes go through training that would incapacitate or even kill an ordinary human. When played straight it's always worth it.

The consequence is usually a Charles Atlas Superpower.

Hey, no pain, no gain. Ergo, according to this trope, a lot of pain, a lot of gain.

Frequently occurs in a Deadly Training Area. For Training From Hell for a whole army, see The Spartan Way. For the parental or parental figure version see Tough Love. May result in Sacrificed Basic Skill for Awesome Training if done from childhood. See also Improvised Training, when they have no equipment or money with which to train. See Look What I Can Do Now! for the aftermath.

Examples of Training from Hell include:

=== Visual Novels ==* Subverted in Fate/stay night. Shirou goes through training every night in magic that nearly kills him and terrifies anyone who sees it. This is, in fact, because he is really bad at practicing. It does essentially nothing for him. Another subversion comes in his sparring with Saber, where she points out that there's no way he can really hope to learn anything in such a short time so she'll just teach him to sense killing intent and get used to battle so he reacts better.

Retrieved from "https://allthetropes.org/w/index.php?title=Training_from_Hell&oldid=1936904"
Categories:
Cookies help us deliver our services. By using our services, you agree to our use of cookies.