Everything About Fiction You Never Wanted to Know.
(Redirected from Nineteen Eighty-Four)
Jump to navigation Jump to search 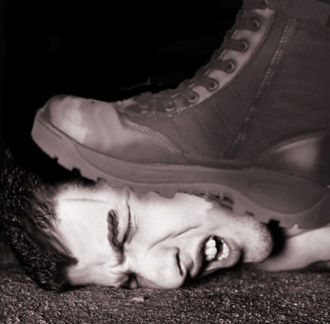 A moment of eternity.

This is the book. One of the most horrifying and depressing codifiers for the Dystopian genre, ever.

After reading Yevgeny Zamyatin's dystopian thriller We, George Orwell wrote Nineteen Eighty-Four as a Pragmatic Adaptation of the novel for non-Russian audiences. It became one of the most iconic stories in the English language, and introduced the phrases "Big Brother Is Watching You", "Thoughtcrime," "Thought Police," and "doublethink" into the English lexicon (but not "doublespeak").

In spite of it suffering from a bad case of Twenty Minutes Into the Future, as the title alone testifies, Nineteen Eighty-Four remains one of the best and most horrific dystopian works ever.

The BBC adapted the book for television in 1954 with Peter Cushing as Winston Smith. Questions were asked in the House of Commons when it was alleged that one viewer had actually died of shock while watching.

Two film versions were made, in 1956 and (appropriately) 1984. The 1956 version changed the ending, completely ignoring Orwell's point, (on purpose, it turns out), although to some extent proving it. The brilliant and depressing 1984 version of Nineteen Eighty-Four, starring John Hurt as Winston and Richard Burton in his final role as O'Brien, is far more true to the original novel, but is often compared unfavorably to Terry Gilliam's surreal dystopian movie Brazil (which came out one year later, in 1985), which takes a much more subversive and blackly humorous view of Orwell's themes.

Compare also with Jennifer Government, another Dystopian novel in which it's not the state or a single party, but corporations who control everything.

NOTE: Do not identify this book as being anti-communist or anti-fascist anywhere on this wiki. It's anti-totalitarianism. Orwell was personally a socialist, but thought that both extremes were bad and would inevitably lead to the same thing. The original political leaning of the Party is deliberately vague.

We shall meet again in the place where there is no darkness.