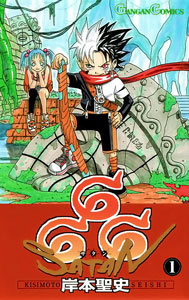 NO! For the last time, it's not a Naruto ripoff!

Written by Seishi Kishimoto, younger twin brother of Masashi Kishimoto -- yes, that Masashi Kishimoto -- 666 Satan, retitled "O-Parts Hunter" in the North American release for rather obvious reasons (though otherwise a faithful translation), is about Jio Freed, who, after joining up with a girl named Ruby Crescant, starts searching for artifacts of an ancient civilization, called "O-parts", so he can take over the world.

And Jio has Satan sealed inside of him.

The series gained a bit of controversy in Japan as many readers accused it of being a blatant ripoff of Naruto. Being the younger twin brother of the author of that series didn't help matters. It got so bad that Masashi had to step in and pretty much tell everyone that wasn't the case and that both brothers just had the same influence (i.e. Dragon Ball) for their works.

This was Seishi Kishimoto's first series, followed by Blazer Drive.

Tropes used in 666 Satan include: