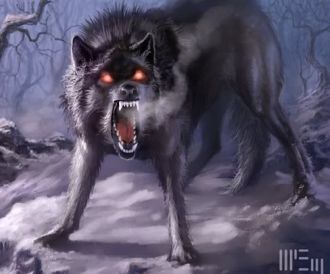 Sleek predators, with cunning pack hunting behaviors, impressively menacing doglike appearances, and, of course, the ever-frightful howl. As one of the top predators in the Northern Hemisphere, wolves were feared as rivals for people of the past, who had to compete with wolves when hunting, and, in times of famine, lost livestock to lupine predation.

Perhaps for this reason the Wolf occupies a singular place in Western folklore and fiction. Among all the predators of folklore, few have been as demonized as wolves, who almost inevitably appear as savage, cunning, endlessly rapacious and irredeemably evil. It is the Big Bad Wolf who devours Little Red Riding Hood's grandmother and the boy who cried wolf; wolf packs that haunt the dark forests. Indeed, in fiction, the wolf almost seems to function as an entire species of evil twins to the tamer, more noble dog. Even when they are good, they are by no means nice. In many aspects, wolves are more similar to humans than any other animal. And well, Humans Are the Real Monsters. It may be these above factors that have uniquely contributed to the popularity of werewolves. While nearly every animal can be given human-like characteristics, with werewolves it also (in fact usually) works in reverse. Being fierce predators, wolves reside partially within the amoral, cutthroat natural world, but being social creatures, they also display the beginnings of civilization. Hence, a man that starts becoming influenced by more of the former starts to look like a wolf.

But as industrialization progressed across the globe and wolves no longer posed as much of a threat, people came to understand wolves differently. The primary reason people disliked wolves - their predation of livestock - was largely forgotten as most people no longer had any experience of livestock themselves. In reality, pure-blooded wild wolves almost never prey upon humans (wolf-dog hybrids and feral dogs are more likely to attack), and display many positive attributes - cunning, cooperation, and great beauty - that gradually elevated them from wicked monsters to respected, even admired predators. It helps that they are devoted to their cubs, who are fall-down cute (they look like dogs; or, more accurately, dogs look like them). For good reason too. After all, dogs are descended from wolves that decided that Man made a better partner than rival.

In keeping with this new, more palatable image of the wolf came a wave of idealized portrayals. Far from being wicked agents of evil, these wolves are proud, majestic, noble protectors of nature, often wise in their own right and sometimes even allies of the forces of Good. Indeed they are almost treated like lions of Europe and North America, or at least a handsome variant of dogs with more personal dignity. Even when wolves were not intrinsically good creatures, they still carried with them a healthy dose of Badass.

Most modern portrayals of wolves range between these two extremes. On the one hand, there's still something chilling about the sound of a wolf's howl, and they look just enough like a dog to be unnerving. On the other hand, having a lupine ally, pet, or character definitely falls under the Rule of Cool, a law that many fictional wolves benefited from.

In reality wolves fall under neither extreme, much like human conceptions of any animal. While normally nonaggressive to humans, wolves can still be dangerous if cornered, and attacks on humans, albeit very few, have been documented, although these are generally attributed to conditions such as rabies. They are also a major danger to livestock in many areas where ecological damage and/or competition with human hunters has made prey rare.

This is a Cyclic Trope/Evolving Trope.

One of the examples of Animal Stereotypes. Wolves' image is commonly transferred to the faction of Petting Zoo People styled after them.

Compare The Big Bad Wolf, Canis Major, Animals Not to Scale, Our Werewolves Are Different, Everything's Worse with Wolves and Hell Hound.

Retrieved from "https://allthetropes.org/w/index.php?title=Big_Badass_Wolf&oldid=1801521"
Categories:
Cookies help us deliver our services. By using our services, you agree to our use of cookies.