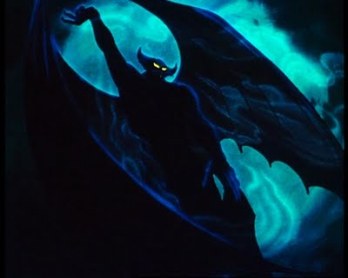 Basically, darkness associated with evil, ugliness, and scary monsters. This is the reason for the naming of The Dark Side and why Evil Counterpart characters and certain Underground Monkeys often have 'dark' in front of their names. Like all Color-Coded for Your Convenience/Good Colors, Evil Colors examples, this is common, but not universal, and will vary from culture to culture.

The logic behind the trope is as follows: most humans fear the dark, because dangerous animals can see better in the dark than we can, and the dark can hide other dangers. Furthermore, the fact that it's so hard to see in darkness (well, for humans, anyways) has caused some of us to associate darkness with deception. Evil is associated with deception as well, so, from Star Wars to cowboy movies, a lot of bad guys wear black hats. If you want to be even more obvious about it, give the bad guy a name that has something to do with darkness.

If a character has darkness-based powers, see Casting a Shadow.

Stories where Dark Is Evil and Light Is Not Good are commonplace to show that the light can be just as foul as darkness.

Why Evil Is Not Well Lit and having the sun vanish is a bad sign. See also Light Is Good, Bad Powers, Bad People, and Obviously Evil.

Dark Is Not Evil is the subversion and the good counterpart of this trope. Another subversion is The Sacred Darkness, where Dark may or may not be evil, but is just as important as Light.

Here are the Image Links.

Examples of Dark Is Evil include:

Retrieved from "https://allthetropes.org/w/index.php?title=Dark_Is_Evil&oldid=1896543"
Categories:
Cookies help us deliver our services. By using our services, you agree to our use of cookies.