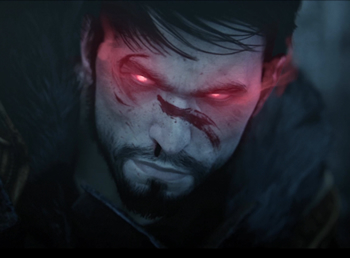 An easy way to tell a villainous (or sinister) character apart from the protagonists, other than giving him/her a Red Right Hand, seems to be making their eyes red. If they don't start out evil, there's a chance they may get Darker and Edgier over time or perform full-blown Face Heel Turn. It's not the same thing as the "red eye" phenomenon in photos, but if cameras could detect evil, these would probably be the first people they'd catch.

In the progressive algorithm of "Oh Crap" with eyes, we have:

The title is derived from an old saying among seafaring travelers: "Red sky at morning, sailors take warning", which means that if the sky is red at sunrise, there's bound to be tumultuous weather ahead. The saying ends with: "Red sky at night, sailor's delight."

This has been around so long it's become a Cyclic Trope, probably multiple times, so be warned! With the diversity of Hair Colors and eye colors in anime, it is entirely possible for someone to have red eyes and be completely innocent! Those with glowing red eyes are almost without exception thoroughly evil or, at least, very dangerous. For those who are not evil, red eyes can serve as a marker for their Elemental Powers, typically fire.

Compare Glamour Failure. A subtrope of Technicolor Eyes. May be part of Evil Albino, or averted/subverted by the Heroic Albino. Not to be confused with the film Red Eye or the liquor. Sometimes a part of Burning with Anger. 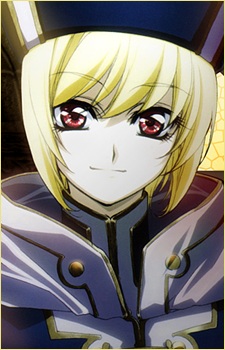 Crimson gems of benevolence and nobility.

Retrieved from "https://allthetropes.org/w/index.php?title=Red_Eyes,_Take_Warning&oldid=1871324"
Categories:
Cookies help us deliver our services. By using our services, you agree to our use of cookies.