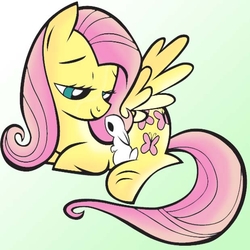 The Cutie is a character who is known for being sweet and lovable, more comic relief than anything, who likes nothing more than to pet little puppies. They make you adore them, root for them and love them.

They are known for being very idealistic, cute and innocent. Some of them even may act in a childlike manner to emphasize their innocence with an upbeat and positive attitude. They also tend to be genuinely nice, loving, caring, and kind to whoever is with them. They tend to take the most peaceful solution to a conflict and hardly ever (if ever) harm others in any way. They're most often female, though younger boys can also be this.

Their innocence and purity draws the sympathy of the audience for them. For this reason they tend to become The Woobie when something bad happens to them.

Related to Break the Cutie, Kill the Cutie, The Fake Cutie, Corrupt the Cutie, Moe, and The Messiah.

Examples of The Cutie include: