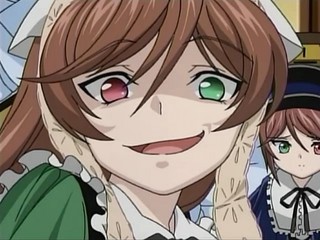 So, one red eye is just a half warning, desu?

Complete heterochromia iridis is a medical condition where an individual has different-colored eyes.

In fiction, this often indicates a character with special powers, perhaps a Shape Shifter or magical being of some sort: traditionally, people with different colored eyes were literally assumed to be a witch, or a (possibly evil) spirit. If so, they can't mask their distinctive eye in any form. Unlike red eyes, this may be merely a sign of a Trickster, or someone with hidden attributes.

Alternately, it may indicate a dual nature or origin. Given the prevalence of odd hair colors and albinism in animation, just being pale with red eyes isn't symbolic enough anymore. Sometimes this is the budget version of Half Human Hybrids, but in any case it's some easily remembered Fashionable Asymmetry that doesn't aggravate the artists much (unless they have trouble remembering which eye is which color).

In real life, there are exceptionally rare instances where each eye might have multiple colors, but this usually doesn't show up in fiction.

As said above, it exists in real life, but in fiction, it will often use an impossible color for at least one eye.

A subtrope of Technicolor Eyes, related to Good Eyes, Evil Eyes. If a villain has these, it's a Red Right Hand. If one of the eyes is Gold, your ass is grass.

Note the Real Life diseases of which heterochromia is often a symptom do not appear much in fiction. This trope is not to be confused with Fish Eyes.

Examples of Mismatched Eyes include:

Retrieved from "https://allthetropes.org/w/index.php?title=Mismatched_Eyes&oldid=1885286"
Categories:
Cookies help us deliver our services. By using our services, you agree to our use of cookies.