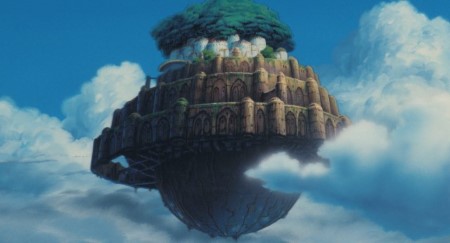 The sky castle of Laputa in Laputa: Castle in the Sky.

An otherwise-normal place that's floating in the sky, often for no adequately-explored reason.

This is an extremely common trope in fantasy and video games. Nothing says "exotic" like a city floating in the sky. Outside of scifi settings, there's also no real way to justify or Hand Wave it, so you basically have to say A Wizard Did It and hope that the Rule of Cool will carry the day. Or never mention it at all.

One thing's for sure, though: If you've got a Floating Continent, it's significant. There's no chance that it's just some random village. Even if it's not The Very Definitely Final Dungeon, something portentous is definitely going to happen there. These places tend to have a higher-than-normal failure rate as a result of this, often becoming more of a Falling Continent.

Waterfalls are often expected to fall from the continent. Even if there's an explanation for how the place stays in the air in the first place, how they can possibly not run out of water is pretty much never explored.

Strangely enough, many such places go unnoticed by the common man, even though they should be perfectly obvious floating there in the sky. Sometimes they're cloaked by clouds, mist, or Applied Phlebotinum, but other times... well, you have to wonder how people can be so sure that the Floating Continent is mythical if they've heard of it at all.

The Ur Example is the original Cloudcuckooland, from Aristophanes' The Birds, but the Trope Codifier is the City of Laputa, from Jonathan Swift's Gulliver's Travels. Swift also originated the Colony Drop: Laputa maintained control of its groundbound colonies by landing on any rebellious population centers, crushing them beneath its armored underbelly. The trope was popularized in modern popular culture by Hayao Miyazaki's Laputa: Castle in the Sky.

If some cataclysm has resulted in the entire planet being broken up into a collection of floating continents, that's Shattered World.

If there is no landmass under these continents, then it's World in the Sky.

Ominous Floating Castle is its own trope.

Examples of Floating Continent include:

Retrieved from "https://allthetropes.org/w/index.php?title=Floating_Continent&oldid=1873900"
Categories:
Cookies help us deliver our services. By using our services, you agree to our use of cookies.