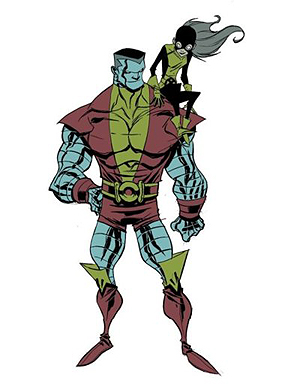 Some writers like pairing up characters of opposite sex and opposite ends of the size spectrum. The height difference goes well beyond One Head Taller, and the tall one is often several times wider to boot.

Averted more often than not in Film and Live Action TV, where props and camera angles are employed to equalize the heights of the leading man and lady, to make filming easier (otherwise, getting them in the same shot would be a pain in the arse). Even when the actors themselves represent this trope, if it appears on screen you can be sure there was an intentional choice to invoke it.

Usually, it's the man who's bigger. This is an exaggeration with some basis in truth: the median height for males is slightly higher than that for females, and many men and women choose opposite-sex mates with the "traditional" comparative height. Physical attraction aside, the idea of a big hulking giant showing his soft side for his little lady is popular with female viewers.

This isn't always sexual though; often the girl is a Morality Pet who hangs out with the guy to show he isn't just a brute. Or it could just be an Intergenerational Friendship. Also, frequently the Huge Guy is the Tiny Girl's relative, usually her father or brother (which provides an interesting dynamic when she's the older one).

Note well: In an action series, the guy may look big enough to break his girl like a toothpick, but she's likely to be just as deadly as her man.

Before adding examples, remember that both the man must be above average height and the woman must be below it. If it's only one or the other (usually a very short woman paired with an average-sized man), that would be One Head Taller. May overlap with Beast and Beauty, Ugly Guy, Hot Wife, or Hot Amazon. See also Improbable Species Compatibility, nudge nudge wink wink. Can edge into Squick territory in some of the more extreme examples. Compare Big Guy, Little Guy.

The inversion of this, which is rather more common in fiction than in real life, is Tiny Guy, Huge Girl.

Retrieved from "https://allthetropes.org/w/index.php?title=Huge_Guy,_Tiny_Girl&oldid=1922404"
Categories:
Cookies help us deliver our services. By using our services, you agree to our use of cookies.