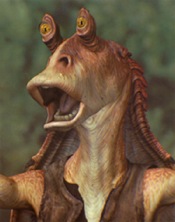 "Dropo, you're the laziest man on Mars!"
—Santa Claus Conquers the Martians

A Plucky Comic Relief character in a sci-fi, fantasy or Superhero story, with a supposedly "cute" appearance and actions, who comes from another planet or dimension, or is a member of some kind of magical race. Such characters are often the Non-Human Sidekick, Small Annoying Creature and/or The Scrappy of the story. Occasionally one of them is a villain, but it's hard to take such a stupid-looking villain seriously. In fact, it's hard to take any story seriously once one of these little buggers is introduced. Really, the trope is sort of a Hand Wave to allow for bloody ridiculous characters. The viewer asks, "Why the hell is that character so stupid and unrealistic, don't they realize he spoils the show?" and the unsatisfactory answer comes back, "Ah, but he's an alien, you see. Everyone's like him where he comes from."

How can you tell if it's an Alien Scrappy? Well, if you're not one of those people that despises all things cute and chirpy, in fact, you'll even squeal at a baby animal once in a while... and you still think the annoying little character should die? That's a pretty good hint.

Also see Amusing Alien, the source of many Alien Scrappies.

Examples of Alien Scrappy include:

Snarf: You--you've got to snap out of it, Lion-O! Call the Thundercats before--
Lion-O: Shut up, you fuck.

Quinn: Why am I a friggin' Martian?
Director: Hey, sweet! Wardrobe got you set up, and listen, you are not a Martian. You're from a super-race of symbiotes. Little snake lives in your belly.
Quinn: Since when?
Director: Well, the writers were, you know, having trouble writing for, uh, urban characters.
Quinn: "Urban" meaning black.
Director: So now he's like Mr. Spock. But urban. Like, "Get at me, dawg!"
Quinn: This show sucks.