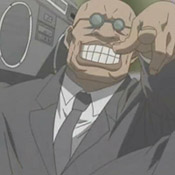 "We are the men of amusing races,
Fated to be eternal jokes.
Dialect men with amusing faces,
Never are we like other folks."

An awful relic from less enlightened times, or a sign that the attitudes from those times have not gone away completely. Comic relief characters in the Small Annoying Creature or The Scrappy mold whose strangeness in appearance and behavior is put down to their being of a different race or ethnicity to the heroes. Often highlighted by their being extreme gonks in an otherwise normal cast.

Sometimes, ironically, they were put in precisely because the creators wanted some diversity in the cast. This is definitely one case where Monochrome Casting would have been a lot less offensive.

This is a mostly Discredited Trope, fit only for Lampshading. It is, however, still sometimes used straight (see picture), and annoying Jive Turkey black characters are not uncommon. Modern remakes tend to remove the racism and comic nature of such characters. See also Uncle Tomfoolery and But Not Too Foreign. Contrast Mexicans Love Speedy Gonzales.

Examples of Ethnic Scrappy include:

Salazar: What's the matter? You see a black man with a pointed stick and it automatically gotta be a spear?

50. Nigrous Nincompoopery, of: Whosoever dons this armor experiences a loss of 1d100 points from each sub-ability of Intelligence, Wisdom, and Charisma. The ass of the wearer will grow by 50% and be abnormally high. If the wearer is male, then those around him are 80% likely to believe that his manhood has increased, though it has not. The skin of the wearer becomes cursed and dark as night. Disposition turns to Unethical Immoral. Temperament becomes phlegmatic. The eyes of the wearer are visible 3 miles away at night. The wearer will have a body odor for 1d10 feet. On the bright side, the Physical Fitness of the wearer increases by 10%. The armor may be removed at will.