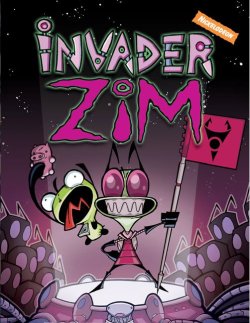 Invader Zim was an Animated Series by Jhonen Vasquez, which premiered in 2001 on Nickelodeon. Reruns are still being shown on the Nicktoons channel as of this writing.

Set Twenty Minutes Into the Future, this dark, Cyberpunkish show starred Zim, an Irken Invader sent by the Almighty Tallest to take over Earth (read: shipped off here because he screwed up on his last invasion attempt; they just want to get rid of him, but Zim doesn't know this).[1] He is ineptly aided in this "mission" by a defective robot assistant named GIR.

Early episodes followed a rigid formula: Zim would attempt to get rid of Dib and conquer the world, while Dib would attempt to expose Zim, only for both to discover that Failure Is the Only Option. But later episodes used a Snap Back to do all sorts of bizarre things unrelated to the plot, and some episodes involved only one of them facing an external threat.

The dark humor and interesting storylines attracted loads of people outside the targeted age range. Part of the reason for this is the show's distinctive art and writing style. The art style is a variation of Jhonen Vasquez's previous work, simplified for animation. Though at first the show stuck to a formula, the efforts of Mr. Vasquez and head writer TV's Frank Conniff developed into a much more idiosyncratic, hammy, and satirical style.

Unfortunately, the show proved Too Good to Last. While quite popular, especially outside of Nickelodeon's typical demographic, its ratings did not have far to slip before Nickelodeon deemed the show's hefty price tag not worth further expenditure. This alone would have provoked mass outcry, but Nickelodeon also declined to sell the show's copyright (and there were other networks interested in purchasing it), to the dismay of creators and fans alike. The Internet Backdraft was considerable, but sadly, largely unsuccessful, with one exception—Media Blasters getting the rights to sell DVDs of the show. (The Media Blasters DVDs have since gone out of print, and Amazon.com has released their own Vanilla Edition collections of the show in an attempt to fill the void. Nickelodeon has also released a "best of" disc, Operation Doom. All of which were only released in North America.)

Despite its short run, the show had and still has an über-huge fanbase, some of whom even now cling to the hopes of a revival. While logic would tell you that the odds are against it, even as late as 2010 Nickelodeon actually has considered the prospect, and by his own account Jhonen Vasquez would be willing to return should such a thing happen (which it most likely will not, but it's nice to know). In the meantime, you'll find yourself with plenty of company should you go looking for fellow fans, but this can be a bit of a double-edged sword given the nature of rumor on the internet, leading to the spread of a lot of well-intentioned but often grossly inaccurate information, especially regarding the circumstances surrounding the show's untimely cancellation (in a semi-recent blog post, the creator himself has noted that even IMDB and Wikipedia contain errors). Be wary of what you read.

With that said, sometimes even the craziest rumors do wind up with a grain of truth to them. In September 2010, Jhonen Vasquez disclosed in a blog post that Nickelodeon had been seriously considering a revival, as Zim's ratings on Nicktoons were scoring second only to Avatar: The Last Airbender.

Tropes used in Invader Zim include:
Retrieved from "https://allthetropes.org/w/index.php?title=Invader_Zim&oldid=1886639"
Categories:
Cookies help us deliver our services. By using our services, you agree to our use of cookies.