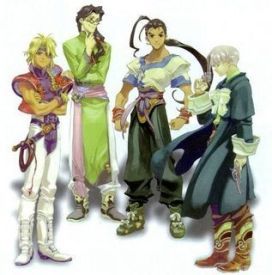 Xenogears was released by Square Enix in 1998 for the original Playstation. Considered either a flawed masterpiece (by fans) or a steaming pile of shit (by non-fans), it is nonetheless a cult classic. It is particularly remembered for a uniquely convoluted plot spanning ten thousand years, themes cooked out of Gnosticism, Jewish mysticism and Jungian psychology, and an atmosphere that was remarkably Anime-like for its time, leading to the game's infamous hour-long cutscenes.

Xenogears is the story of Fei Fong Wong, a sensitive painter (and spectacular martial artist) with a past he's conveniently forgotten, who believes himself a normal person and wants merely to live out his life in the backwater town of Lahan, up until the moment it gets razed down into the ground by a mechanical fighting machine called a Gear. With his fate bound to this rather unique Gear, and searched after by the Gebler, the military force of the celestial empire of Solaris, our reluctant hero has to flee, aided by the town doctor, Citan Uzuki, who is nothing but more than he seems.

Of course, rather than just hide in a hole in the ground or something simple like that, Fei instead gets caught up with the struggles between a rebel prince for his kingdom; a swordfighting bishonen villain from the inner circles of the Empire of Solaris; the Ethos, a mysterious church with gunslingin' priests that have a stranglehold on the world's technology; and most notably an officer of Gebler named Elhaym Van Houten, whom he conveniently calls "Elly" before learning her name. Tossed across the globe in search for a place where people don't try to kill him and perhaps some explanation for his Mysterious Past, Fei and his growing crew of unlikely companions start to uncover the forgotten past of the world and learn of its true underlying struggles that go back thousands of years.

All of this, of course, goes right to the heart of the issue of who Fei actually is, which Fei desperately tries to figure out while combating some five fairly well written villains, who on top of everything, have the distinct advantage of being in a game which gives them more screen time than most party members and a surprisingly fair chance of getting what they want. This is about the point where things get really weird, as the disk changes, and Fei learns he has a monster living inside his head. Himself. Most of the rest of the story is actually narrated by the main characters sitting in wheelchairs over still images of cool stuff happening. It's an awesome story, though, honest.

It has been suggested that the primary reason for sudden change in style on Disc 2 is due to Final Fantasy VIII's production. Squaresoft pulled team members and resources away from the Xenogears production team in order to more efficiently get Final Fantasy VIII done on schedule. This may be because they considered that game more important (being a Final Fantasy title).

Interestingly enough, the game's creators have stated that in its early development stages, Xenogears was planned to be Final Fantasy VII, and later, Chrono Cross.

The game was written and directed by Tetsuya Takahashi, who later on would become the founder of the Monolith Soft studio. Music for the game was composed by Yasunori Mitsuda.

Followed up a few years later by Xenosaga for PlayStation 2, a Spiritual Successor franchise and Continuity Reboot. However, it was developed by Monolith Soft, which was formed by Xenogears team members that left Square Enix after the completion of the original game. Also, the game was produced and published by Namco. Many believe didn't live up to the original game, although many others believe it surpassed it.

In 2010, it had yet another Spiritual Successor, although In Name Only: Xenoblade Chronicles for Wii. Also developed by Tetsuya Takahashi and Monolith Soft, but this time produced and published by Nintendo. Although this one was arguably more faithful to the spirit of the original Xenogears.

Now up on the Playstation Network.

Tropes used in Xenogears include:
Retrieved from "https://allthetropes.org/w/index.php?title=Xenogears&oldid=1684749"
Categories: