Everything About Fiction You Never Wanted to Know.
Jump to navigation Jump to search
/wiki/Arcade Firecreator 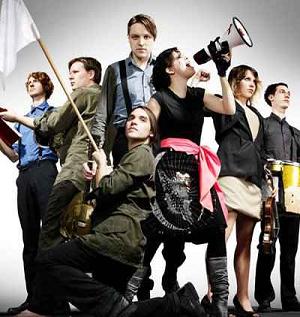 Arcade Fire, sometimes misnomered as "The Arcade Fire" [1] , is a Canadian indie rock band formed in Montreal in 2003 by American brothers Win and Will Butler and Win's Haitian-born Quebecois wife Regine Chassagne, among others. Since that time, they've acquired a reputation for dynamic live shows and have several famous fans. Bono and David Byrne have both sung their praises, and they've performed live with David Bowie, U2 and Bruce Springsteen.

The band is also known for doing things that would normally destroy a band's reputation, but somehow getting away with their reputation unscathed. They constantly change their sound between albums (and in one case between an EP and an album), which always splits their fanbase, and they had a feud with Flaming Lips member Wayne Coyne.

The band's third album, The Suburbs, was awarded the 2011 Grammy for Album of the Year, which many music writers claim is a Crowning Moment of Awesome for the band, their label Merge Records, and the indie rock genre as a whole.