Everything About Fiction You Never Wanted to Know.
Jump to navigation Jump to search
/wiki/Radioheadcreator 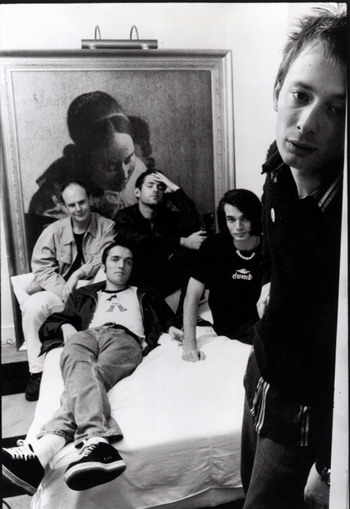 "High up above, aliens hover
making home movies for the folks back home
of all these weird creatures
who lock up their spirits
drill holes in themselves


and live for their secrets."
—Radiohead, Subterranean Homesick Alien

Radiohead is an extremely popular Alternative Rock group from England. Originally your usual type of alt-rock band, the sound on their early albums (Pablo Honey, The Bends) gave way to more ambitious albums that incorporated spacey rock (OK Computer) and experimental electronic sounds (Kid A, Amnesiac, Hail to the Thief) before returning to a slightly more mainstream sound (In Rainbows). Their 2nd to last album, The King of Limbs, sees the band dabble in electronic experimentation once more, with a distinct dubstep influence in places.

The members have also put out solo albums (which have gone on to have less success than the main band's work); in particular, guitarist Jonny Greenwood has found success outside the band scoring films such as Bodysong and There Will Be Blood. He also composed the score for the film adaptation of Norwegian Wood, in addition to "We Need To Talk About Kevin". He's set to score another film by Paul Thomas Anderson, "The Master".

The band is known for its anti-establishment lyrics and, since Kid A, rejecting much of the standard promotion forms of the industry. Most notably, the band opted to promote Kid A (which was highly anticipated after the success of OK Computer) with a series of one-minute long viral videos featuring snippets of each song from the album. Furthermore, the group opted to allow fans to name their own price for the right to download their album (In Rainbows) online off of their website.

In 2011, the band ambushed fans and industry followers again by announcing their album The King of Limbs less than a week prior to its actual release date. Then they once again surprised their fans by releasing it one day earlier.

Radiohead's artwork is quite weird. The website for the man responsible for most of that artwork, Stanley Donwood, is just as odd.

Non-members who have had a major impact on Radiohead's sound and image:

There was a rumor circulating around the internets that the band would release a EP called Wall of Ice on August 17, 2009. Many news sources picked up the story, but it was proved untrue. Instead, Radiohead simply confirmed that the song that started this rumor - "These Are My Twisted Words" - was indeed them, and posted the single for free on their site and the torrent hosting site Mininova.

Thom: They're all...
Audience: Uptight! Uptight!

"Well, yeah, I had a couple of flings at college with some guys. But my girlfriend knows about them, so it’s all right. She doesn’t like me hanging out with her gay friends in London too much, just in case I get tempted!"

"We played in Barcelona and the next day the entire performance was up on Napster. Three weeks later when we got to play in Israel the audience knew the words to all the new songs and it was wonderful."

""Shame it's not a package with the artwork and all, but there you go. I feel bemused, though, not annoyed. I'm glad people like it, most of all. It's a little earlier than we'd expected, but there it is."

"...even if we disbanded tomorrow, I would still consider them to be my brothers."

Thom: This'll all sound much better when it's played by the orchestra.

I slipped away/I slipped on a little white lie/We've got heads on sticks/We've got ventriloquists/Standing in the shadows at the end of my bed/The rats and the children follow me out of town, etc.,