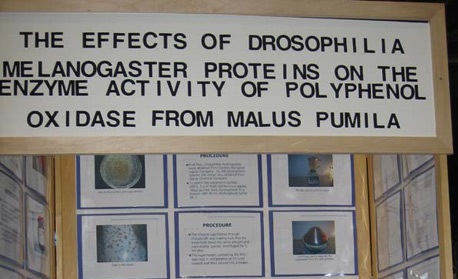 In other words, the effects of fruit flies on the browning of apples.

Sesquipedalian: A long word, or characterized by the use of long words. From the Latin roots meaning "a foot and a half long."

Loquaciousness: That would be garrulousness, verboseness, effusiveness. How about "chattiness"?

A predilection by the intelligentsia to engage in the manifestation of prolix exposition through a buzzword disposition form of communication notwithstanding the availability of more comprehensible, punctiliously applicable, diminutive alternatives. Also known as "gross verbosity".

In brief: "smart" characters using long words when short ones would be better. Characters afflicted with this trait often seem to go out of their way to over-complicate their speech, probably because writers think that this is the only way to show that someone is more intelligent than the average writer. This could also be the trait of a particularly anal-retentive character who always has to be right, the trait extending so far that the character always has to use exactly the right word—never using "blue" when "azure" would be more accurate, for example.

Occasionally such characters may drop the long words if things get particularly dire, to emphasize just how bad things are (in the same way as a Sarcasm Failure). Alternatively, they may get even more wordy as they get more emotional, leading to increasingly detailed but ultimately incoherent ranting that falls too easily into Wangst. Frequently another character will respond with something like "Wouldn't it be easier to just [whatever the brainy person said, in layman's terms]?" or "And [layman's terms version], too!"

Ironically, Williams Syndrome can lead to this kind of behavior. People with Asperger's Syndrome may do this in an attempt to be as precise as possible, ironically making their oratorical sonorities too pleonastic to be expeditiously assimilated.

One of the symptoms of Spock Speak. Usually also a Motor Mouth. Often takes advantage of the fact that Talking Is a Free Action. See also Techno Babble, Expospeak Gag, Antiquated Linguistics, Sophisticated As Hell, and Department of Redundancy Department. Often a component of Little Professor Dialog. If someone tries for this and can't get the words right, they're perpetrating Delusions of Eloquence. If the author commits this, see Purple Prose. The word Antidisestablishmentarianism is almost guaranteed to show up as well.

Very heavily associated with the Steampunk genre in particular, and Truth in Television in that case, as the Victorians did speak a form of English that was more complex and verbose, and less dumbed down than current usage.

It's worth noting that there is a word for the fear of long words; ironically, it's "sesquipedalophobia" often exaggerated by people into "hippopotomonstrosesquipedaliophobia".

The polar opposite of Buffy-Speak. Big Words redirects here, for those of us who prefer to avert this trope in Real Life. Contrast the Laconic. Also note that the similarity to Techno Babble. May require one to have a Translator Buddy.

Examples of Sesquipedalian Loquaciousness include:

Animated and drawn media originating in the Eastern nation of Nippon-Koku, known in English as Japan (Anime and Manga)

The entire thing can also be translated to mean "Success is random.":

This is pretty typical for articles dealing with the symptoms of various toxins. At least they're (usually) courteous enough to Pothole the more arcane words so you can just click them and say to yourself "oh, is that all that means?"

Look up Eubonics, I mean African American Vernacular English on wikipedia, without grinning, its tougher than it sounds.

Retrieved from "https://allthetropes.org/w/index.php?title=Sesquipedalian_Loquaciousness&oldid=1954918"
Categories:
Cookies help us deliver our services. By using our services, you agree to our use of cookies.