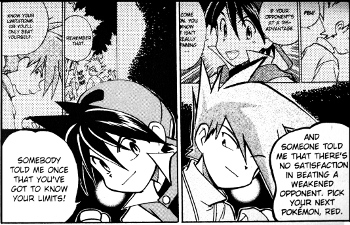 It's quite a popular device in fiction to reuse lines of dialogue. The Ironic Echo is a common trope built around this—when a prominent line of dialogue is repeated later, but with a flipped or surprising new meaning.

A Meaningful Echo is similar to an ironic echo, but without the irony. It occurs when characters, in their usual way, say things to one another. Normally, these things aren't all that notable or special—they're part of normal dialogue. However, later on in the story, one of these "ordinary" lines is repeated. But unlike the original line, it isn't in a normal, throwaway context. It's at a moment of emotional height, when the viewer or reader is deep into the work, making a callback to an earlier scene. Suddenly, the line isn't simple or meaningless anymore. It's heartwarming, tear-jerking, or awesome. If it had meaning before—however minor—it's now been expanded to a much greater context. It's gone from being something ordinary to something extraordinary.

Examples of Meaningful Echo include:

"Nobody gets left behind.