Everything About Fiction You Never Wanted to Know.
Jump to navigation Jump to search
/wiki/Billy Joelcreator 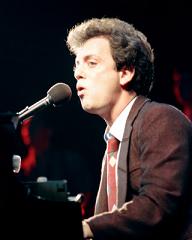 Sing us a song tonight.

William Martin Joel, better known as Billy Joel or "Billy", is an American singer-songwriter, musician, and classical composer. He is the third best-selling solo artist in the United States with thirty-three top forty hits and six Grammy Awards to his name. As his 1973 breakout hit "Piano Man" implies, he is a quite skilled piano player, and many of his most famous songs have strong keyboard elements.

His discography has a wide range of styles include schmaltzy soft-rock love songs that perhaps reveal Too Much Information about his relationships (especially that with ex-wife Christie Brinkley), tributes to 1950s artists and stylings, attempts at working class rock comparable to Bruce Springsteen, jazzy ruminations on fame, religion, substance abuse (something he has experience in), or his hometown of New York City, bluesy piano numbers, and pure classical compositions. Said range contributed to the formation of Movin' Out, one of the first and best known examples of the Jukebox Musical. He is also known for voicing Dodger in the Disney animated film Oliver and Company.

Joel has mostly retired from pop songwriting and recording, but he still tours occasionally, sometimes with close friend Elton John.

References to his songs come up in pop culture quite a bit: among them a second season episode of American Idol had the contestants singing songs from his catalog, he's been the musical guest on four episodes of Saturday Night Live, an entire episode of Freaks and Geeks was dedicated to his music (and surprisingly, kept all of it for the DVD), and a classic Sesame Street skit has him serenading Oscar the Grouch along with Marlee Matlin.

Not to be confused with Billie Joe or Billy Idol.

Billy Joel is the Trope Namer for:
Billy Joel provides examples of the following tropes:
Retrieved from "https://allthetropes.org/w/index.php?title=Billy_Joel&oldid=1849676"
Categories:
Cookies help us deliver our services. By using our services, you agree to our use of cookies.