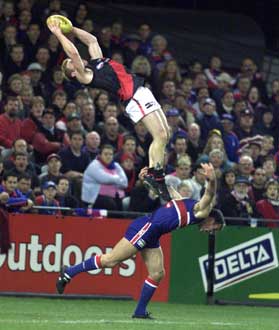 "1859: The Aussies invent Australian Rules Football, a combination of soccer, rugby, and murdering people in cold blood."
—The Onion, Our Dumb World

The dominant football code in Victoria, South Australia, Western Australia and Tasmania. Rugby League is more popular in New South Wales (north of Wagga Wagga, which has been described as the "border" between Aussie Rules and Rugby territory) and Queensland, although there are AFL teams based there. In Victoria, especially Melbourne, Aussie Rules is not a religion, it's more important than that. Go ahead, try getting a taxi on Grand Final night.

Aussie Rules is ... umm ... what's the word? ... violent. Very, very violent. It's like Rugby turned Up to Eleven. In recent years, the AFL has been trying to clean up the game's image and counteract this - certainly, the actions of players such as Robbie Muir, David Rhys-Jones and Jack "Captain Blood" Dyer would be unacceptable today. Still, even when they play by the rules, it's hard to watch without wincing. Those sissies in Mixed Martial Arts should give this sport a try.

The game is played on an oval field you could land an Airbus on, with 18 players per side (plus a four-player bench - three of whom can freely enter and exit the game, while the fourth is a designated soccer-style substitute whose entry ends the replaced player's day). It is divided into four quarters of twenty (formerly 25) minutes each, not including stoppage time. A match begins in the centre of the field with an umpire bouncing the ball high into the air, at which point a player from each team (the "ruck", who is usually very tall) will jump up and try to punch the ball towards their own players. Players can run with the ball, but must bounce it on the ground every fifteen metres; they can pass the ball by kicking or handballing (i.e. tapping away with the side of the fist) but not by throwing. Catching a ball that has been kicked over a distance of fifteen metres or more without bouncing is called a mark, and automatically earns a free kick. A goal is scored when the ball is kicked between the two central posts by the attacking team, without being touched by another player or hitting the post -- this is worth six points. A "behind" is scored if the ball goes between the central and outer post, or hits a player or goal post on the way through, and is worth one point. Hitting the outer posts is worth no points.

The eighteen teams of the AFL are:

The introduction of the GWS Giants and the Gold Coast Suns is part of an effort on the part of the AFL to increase their profile in the states of New South Wales and Queensland, which primarily follow rugby league as their football code. For a while, the Gold Coast team was going to be a relocated North Melbourne, but this fell through when they decided they didn't fancy moving after all (this came after years where the club had renamed itself simply the "Kangaroos Football Club" and were living in a limbo between representing North Melbourne, the Gold Coast, Canberra and Mars). After that particular debacle, the two new clubs were founded from scratch.

Tasmania, the Northern Territory and the Australian Capital Territory don't have full-time representation in professional football, despite the game being extremely popular in the former two. Tasmania has recently launched a campaign to get a team of their own in the AFL too, after decades of seeing all their best players have to move interstate to play at the top level. Even though Tasmania has produced some genuine AFL talent, the AFL doesn't take 'calls' for a Tasmanian team seriously. While no teams call Tasmania or the territories home, the AFL plays regular-season games in each area. Hawthorn plays about a third of its home schedule in Launceston (Tasmania) while North Melbourne hosts a couple of games in Hobart. Darwin (Northern Territory) gets about two games a year, and GWS has a second home in Canberra (Australian Capital Territory).