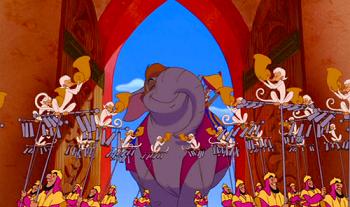 A Big Entrance is Exactly What It Says on the Tin. An entrance so over-the-top and so cool, ensuring that every character's eyes are on that entrance, that the entrance itself merits its own entry on the Crowning Moment of Awesome page.

The absolute most important things in the entrance are that the entrance itself has to be loud, it has to be overly dramatic, it has to catch the attention of all characters present and it has to be cool. There are many other tropes that can help achieve this. Such as...

The diametric opposite of the "Stealth Bye" in a Stealth Hi Bye.

May become an Establishing Character Moment.

Examples of Big Entrance include:

Retrieved from "https://allthetropes.org/w/index.php?title=Big_Entrance&oldid=1853604"
Categories:
Cookies help us deliver our services. By using our services, you agree to our use of cookies.