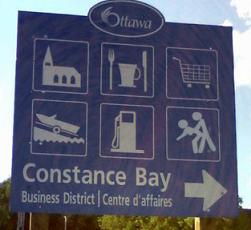 When a mundane conversation goes bad. You're winding up a boring conversation, and throw in one last thing in there. And that one last thing was praise for Adolf Hitler, or a plan to kill the Mayor, or an offhand comment that you pick your nose, when you had been talking about options for where to eat dinner or something.

Bonus points for the listener asking with a horrified tone "What was that last one again?" and the last harmless option before the horrifying one being repeated instead.

A common variation has one additional, harmless (but often comically inappropriate) item tacked on to the end of the list. This allows other characters to react in horror -- to the wrong thing:

A more subtle trick is when the Squick is revealed by a change in the camera shot.

The inverse of Arson, Murder, and Jaywalking, where the mood is lightened by including something silly.

Compare Breathless Non-Sequitur, Weird Aside. Subtrope of The Last of These Is Not Like the Others.

When this trope name is taken literally, see: Oh Wait, This Is My Grocery List.

Incidentally, according to Word of God, these are all real teas.

Retrieved from "https://allthetropes.org/w/index.php?title=Bread,_Eggs,_Milk,_Squick&oldid=1824563"
Categories:
Cookies help us deliver our services. By using our services, you agree to our use of cookies.