Everything About Fiction You Never Wanted to Know.
Jump to navigation Jump to search
/wiki/Danny Elfmancreator 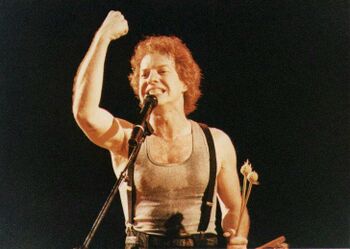 Former leader of Oingo Boingo, Danny Elfman first broke into film scoring with Pee Wee's Big Adventure. Since then, he has worked steadily in Hollywood (most notably for Tim Burton), composing scores and themes for movies, TV, and even video games and a Cirque Du Soleil show (namely IRIS, a show inspired by the history of cinema).

Like John Williams, Elfman tends to compose classical, Romantically-themed music reminiscent of Bernard Hermann, although Elfman makes more limited use of Leitmotif and his music tends to have darker overtones—which seem to mesh well with Tim Burton's films.

His scores are frequently used in trailers.

He's married to Bridget Fonda, and they have a son together named Oliver, which in old English means "Elf Army". He also has two daughters, Lola and Mali, from previous relationships.

Films scored by Elfman include (but are certainly not limited to):

NOTE: Although Elfman was originally signed to score The Hunger Games, a scheduling conflict led to him being replaced by James Newton Howard; Elfman never wrote any music for the project.

Elfman also composed the theme music for:
Retrieved from "https://allthetropes.org/w/index.php?title=Danny_Elfman&oldid=1503294"
Categories:
Hidden category:
Cookies help us deliver our services. By using our services, you agree to our use of cookies.