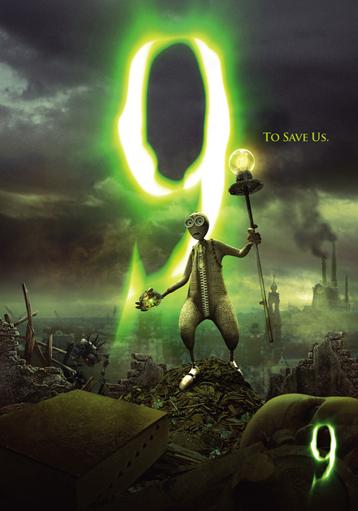 Ladies and gentlemen, our hero.

The title 9 refers to two Animated movies, both directed by Shane Acker:

The main characters are sackdolls, or ragdolls depending on who you ask, though two are made from garden gloves. The creator, Shane Acker, has officially dubbed them "stitchpunks". This has generally become the term for them in fandom.

In both cases, the plot follows a stuffed sackdoll, simply known by the number 9 painted onto his back, as he attempts to survive in an Alternate Universe where humanity has been wiped out.

The short was released first, and chronicles 9's attempts to defeat an unnamed mechanical creature, who killed 5, his one-eyed mentor, and the other dolls, and retrieve the machine's soul-stealing device. The film, while ambiguous about the setting, was praised for its storyline and plot.

The movie expands on the short considerably; Nine's companions are still alive, and the team are journeying throughout the wasteland in an attempt to stop the machines that killed humanity from reawakening. Judging by the trailer, it doesn't work.

9 is the Trope Namer for:
Tropes used in 9 include:

Both contain examples of

The short contains examples of

The movie contains examples of

Retrieved from "https://allthetropes.org/w/index.php?title=9&oldid=1901726"
Categories:
Cookies help us deliver our services. By using our services, you agree to our use of cookies.