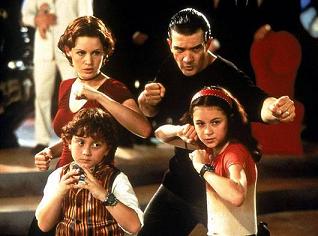 An original trilogy was created from 2001 to 2003, focusing on Carmen and Juni Cortez, a Brother-Sister Team of Preteen Superspies, whose adventures came to resemble spying less and less as the series went along. In the first movie, they discover their seemingly normal parents are actually retired spies and set out to rescue them from a Mad Scientist who moonlights as the host of Juni's favorite TV show.

Spy Kids 2: Island of Lost Dreams introduces a rival team of kid spies, whose dad ends up being the Big Bad, and featured a plot taking place on a tropical island with a mysterious power. The third installment, Spy Kids 3D: Game Over, was a 3D Movie set inside a video game created by a madman to Take Over the World. Game Over is widely seen as an utter disaster by fans of the first two films and is often regarded as the point when the series Jumped the Shark. The critics agreed, with Rotten Tomatoes giving the first film a 93% rating and the third film a 44% rating.

Eight years later in 2011, Rodriguez saw fit to continue the series with Spy Kids: All The Time in the World. The story this time focuses on a new pair of siblings whose step-mother is a retired spy for the OSS. When she get into trouble, the kids find out her secret and set out to save her with some assistance from a now grown Carmen and Juni. Yes, it's rehashing the first movie's plot, but in a way that brings everything around full circle. However the comeback wasn't well received as critics trashed it once it hit the box office with Rotten Tomatoes giving it a 23%, even less than the third movie.

The character of Machete originated in this series, and a spoof of what he'd look like as a B-movie action hero later appeared in one of the Grindhouse trailers. That trailer was eventually made into a full-length exploitation flick parody.

Tropes used in Spy Kids include:
Retrieved from "https://allthetropes.org/w/index.php?title=Spy_Kids&oldid=1868562"
Categories:
Cookies help us deliver our services. By using our services, you agree to our use of cookies.