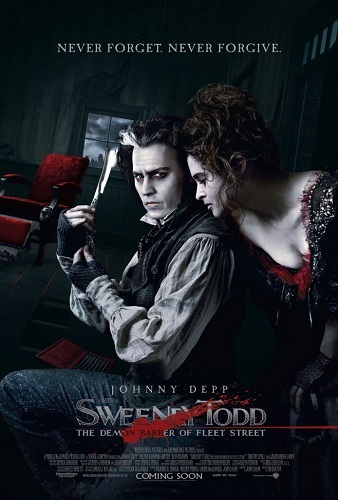 It is based on the Sondheim musical of the same name, which was based on the Christopher Bond version of the legendary story of an English barber who murdered his customers and, with the help of his neighbor Mrs. Lovett, made them into pies.

In this version of the story, Todd is out to get revenge on a corrupt Judge who sent him to prison on false charges, raped his wife (who then committed suicide), "adopted" his daughter Johanna fifteen years ago and plans to marry her. Mrs. Lovett smoothly tries to dissuade him from this goal so that he can settle down with her and run a business, whilst Johanna takes a shine to a young sailor.

Tropes used in Sweeney Todd: The Demon Barber of Fleet Street (film) include:
Retrieved from "https://allthetropes.org/w/index.php?title=Sweeney_Todd:_The_Demon_Barber_of_Fleet_Street_(film)&oldid=1968141"
Categories:
Cookies help us deliver our services. By using our services, you agree to our use of cookies.