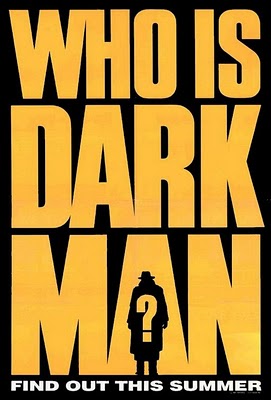 The answer lies within this page.

Years before Sam Raimi brought a certain web-head to the screen; he created his own superhero in this 1990 film. It stars Liam Neeson as Peyton Westlake, a scientist who has invented synthetic skin that, at this point, will disintegrate after 99 minutes of exposure to sunlight. His girlfriend, Julie (Frances McDormand), runs afoul of gangster Robert G. Durant and his thugs, who have him nearly killed. Peyton, now horrifically burnt, uses his own invention against the crooks as his new alter-ego, Darkman.

Darkman was generally well received by critics and performed well at the box office, grossing almost $49 million worldwide, well above its $16 million budget. This financial success spawned two direct-to-video sequels, Darkman II: The Return of Durant and Darkman III: Die, Darkman, Die (in both of which Darkman is played by Arnold Vosloo), as well as numerous comic books, video games and action figures. Over the years, Darkman has become regarded as a cult film.

Tropes used in Darkman include:
Retrieved from "https://allthetropes.org/w/index.php?title=Darkman&oldid=1758473"
Categories: