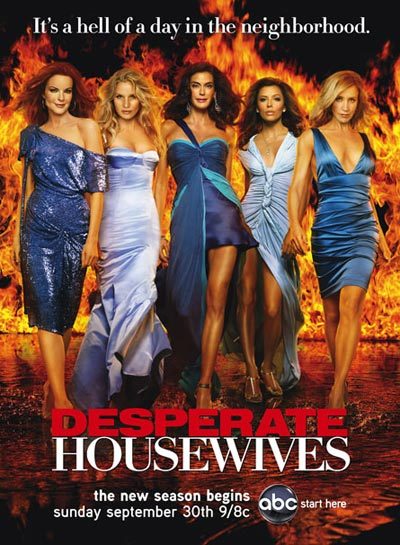 Bored wives in Suburbia experience unrealistic drama in their lives after the suicide of their friend.

Notable for its combination Narrator/Near-Death Clairvoyance trope, in which the entire series is narrated by the dulcet tones of an apparently omnipresent dead woman - the friend who committed suicide.

Basically a comedic soap, which means that unlike a regular soap, this program is funny and has interesting plotlines. However, the situations are often just as ridiculous and the relationships and plots just as hopelessly tangled-up and interwoven as any old-fashioned soap (though unlike daytime soaps, the fast pace tends to leave many confused if they miss a couple of episodes - probably why the Clip Show specials still proved relatively popular).

Owing to creator Marc Cherry's penchant for comedy, the series pokes fun at itself and its characters about as often as it takes them seriously, probably the number one thing that attracted most of its initial viewership, aside from the fact that it throws vicious, subversive holes in the ideas of suburban paradise and maternal bliss. In fact, ratings dropped after Executive Meddling caused the second season to be more "dramatic" (read: melodramatic) leading to the panicked execs basically saying "OK, OK we'll go back to doing more comedy again, Marc. You win." Ratings apparently improved again after that point.

Think Sex and the City meets daytime soap, meets parody of daytime soaps, set in the suburbs instead of the city with housewives instead of single women. Narrated by a dead woman.

You get all that?

A word of warning to those who aren't up-to-date on the latest episodes, the series is basically one string of continuous spoilers, so it is hard to detail just about anything that happens without revealing one twist or another. So be prepared for unmarked spoilers below.

Has a Character Sheet. Feel free to contribute.

Tropes used in Desperate Housewives include:

Retrieved from "https://allthetropes.org/w/index.php?title=Desperate_Housewives&oldid=1831802"
Categories:
Cookies help us deliver our services. By using our services, you agree to our use of cookies.