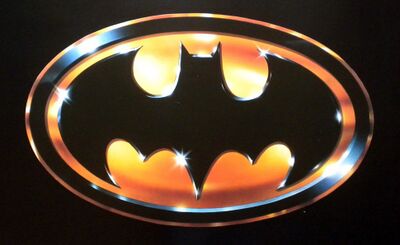 Bruce Wayne (Michael Keaton) has been fighting crime in Gotham as Batman for some time when this film starts, but is an enigma to a city unsure of what he is. The plot here chronicles his battles with Jack Napier/The Joker (Jack Nicholson). In terms of popularity, this film is the best regarded of this film series.

See also Batman the Animated Series, which took some cues from the Burton films and actually launched the same year as Returns, and went on to produce a few movies of its own. The notorious Catwoman film in 2004 has no continuity connection with these, but it's worth noting that the whole idea of doing a film about her alone was inspired by Pfeiffer's performance in '92.

Not to be confused with Batman: The Movie based on the Television Series with Adam West.

Tropes used in Batman (film) include:
Retrieved from "https://allthetropes.org/w/index.php?title=Batman_(film)&oldid=1921910"
Categories:
Cookies help us deliver our services. By using our services, you agree to our use of cookies.