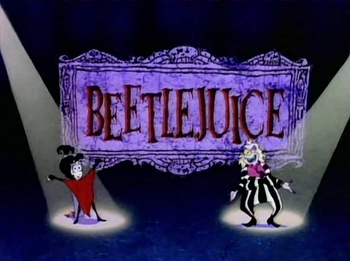 Meet Lydia Deetz, a Perky Goth girl attending a private school in a sleepy little Connecticut town while trying to deal with her well-meaning but eccentric parents. One day she comes across Beetlejuice, the manic self-described "Ghost With the Most", who befriends her and whisks her off from her ordinary life into frequent adventures in the Cloudcuckooland world of the afterlife. Hilarity Ensues.

Based on the hit movie of the same name, the animated series was produced by Nelvana and aired for several years on ABC and Fox Kids. Its original run lasted from September, 1989 to May, 1992 for a total of 65 episodes. It bore only a passing resemblance to the movie: Barbara and Adam Maitland, the straight-laced protagonists of the movie, were eliminated entirely, the title character's name was changed from Betelgeuse to "Beetlejuice", he and Lydia were best friends rather than enemies, and the stories largely took place in Beetlejuice's ghostly home dimension, the Neitherworld.

However, it kept a lot of the same manic energy and clever visuals as the movie. Also, Tim Burton remained involved as a producer, and Danny Elfman did the theme music. Therefore, it's generally considered one of the better film-to-TV translations. Beetlejuice remained largely a Jerkass, though now a family-friendly, usually well-meaning Jerkass.

Tropes used in Beetlejuice, the animated series include:
Retrieved from "https://allthetropes.org/w/index.php?title=Beetlejuice_(animation)&oldid=1928777"
Categories:
Cookies help us deliver our services. By using our services, you agree to our use of cookies.