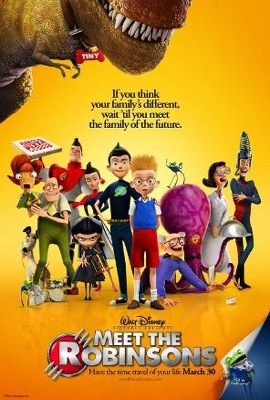 Walt Disney's 47th animated feature, released in March 2007 in standard and Disney Digital 3-D and based loosely on William Joyce's picture book A Day with Wilbur Robinson[1] (though Joyce did have some creative input on the adaptation).

Follows the story of 12-year old orphan/child prodigy Lewis in his attempt to find a family, a journey that takes him 30 years into the future with the fast-talking Wilbur Robinson and in pursuit of the do-wrong, overgrown man-child Bowler Hat Guy and his evil, robotic bowler hat, hell bent on taking credit for Lewis's inventions.

Has some serious problems with Time Travel logic and yeah, it makes us scratch our heads. Despite that, it's one of the better non-Pixar Disney films in recent years. Your Mileage May Vary on whether or not it's non-Pixar though. Pixar and Disney were fusing while this movie was being made. As John Lasseter's first effort in touching Disney's animated films since becoming its chairman, he looked at it after it's first drafts were all completed and ordered 40% of it rewritten and reanimated. This could be a factor behind the film's positive critical reception as compared to its immediate predecessors.

The film had music by Danny Elfman.

There was also a console game that served as a midquel that mostly averted The Problem with Licensed Games. The game's plot expands Wilbur's efforts in trying to get the stolen time machine back from Bowler Hat Guy. When arriving at the Science Fair though, he accidentally alters the timeline drastically just by opening the door into a student named Stanley's face. As a result, Stanley and another student, Lizzy, become dueling super-villains, and Wilbur has to get his own time machine back from their forces in order to go back and fix things.

Tropes used in Meet the Robinsons include:

Tropes used in the game include

Retrieved from "https://allthetropes.org/w/index.php?title=Meet_the_Robinsons&oldid=1830492"
Categories:
Cookies help us deliver our services. By using our services, you agree to our use of cookies.