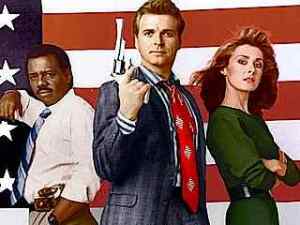 Sledge Hammer! is a television sitcom created by Alan Spencer that ran on ABC from 1986 to 1988. It is an unrestrained Parody of the Cowboy Cop genre (Dirty Harry specifically), with David Rasche as Inspector Sledge Hammer, a cop who shoots first and asks questions never. He is partnered with Detective Dori Doreau (Anne-Marie Martin), and the two work for the ever-exasperated Captain Trunk (Harrison Page).

While Hammer respects his colleagues, his only true friend is his .44 Magnum Smith & Wesson Model 29 revolver, complete with customized grip and etched sledgehammer signia. Hammer's affection for his gun is so deep that he showers with it, sleeps with it, and even talks to it.

The series received critical acclaim, but struggled in the ratings, largely due to its numerous time slot shifts. Even so, Sledge Hammer! attracted up to nineteen million viewers who followed the show religiously, along with a very abbreviated Comic Book series from Marvel Comics. Despite a season finale that ended with a nuclear explosion, ABC changed its mind and renewed the show for a second season. The second season suffered from another horrible time slot (against The Cosby Show) and a reduced budget.

Not to be confused with Sledgehammer.

Trust me, I know what I'm troping:
Retrieved from "https://allthetropes.org/w/index.php?title=Sledge_Hammer!&oldid=1861973"
Categories:
Cookies help us deliver our services. By using our services, you agree to our use of cookies.