Friend to All Living Things 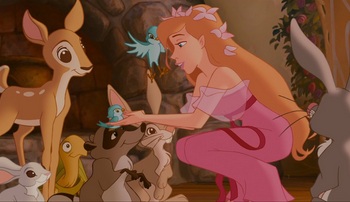 Why do birds[1] suddenly appear
Every time you are near?

A character, almost Always Female and the heroine of the piece, is shown to be almost supernaturally innocent, sweet, altruistic, or any combination thereof, by the way that all manner of wild forest creatures flock to her. Deer will shyly eat out of her hand, chipmunks will frolic at her feet, and birds will alight on her finger, shoulder or head (and not void their bowels while doing so). Occasionally, a male is used due to St. Francis of Assisi being the patron saint of animals, in which case the character is rather shown to be wise, calm and kind-hearted. As for the animals, they will all be cute, at least in a typical example.

Of course, any other person approaching will break the spell and send the timid woodland animals fleeing, but not before they witness the supernatural wonder of her loving heart in action.

Sometimes the heroine has such influence over the wild creatures that they will perform small tasks for her. In the case of gods or saints, flowers will spring up at their feet.

This is a frequent attribute of The Messiah, and Princess Classic. Sometimes a trait of the Fluffy Tamer, who prefers living things with fangs, scales, and/or the capacity to breathe fire.

Compare Green Thumb. Contrast with Evil-Detecting Dog and Enemy to All Living Things. Also see Not Good with People for a semi-subversion of this character type. In more cynical shows, the Friend to All Living Things is commonly also a Cloudcuckoolander. With females, this may be related to the myth that only a virgin girl may approach a unicorn.

In Fan Fiction, this is an early warning sign of a particularly blatant Purity Sue, being tricky to play well in a fanfic. This goes double if they also strike up an immediate friendship with characters like Tinker Bell, i.e. those who, in canon, are at best distrustful of and at worst violent towards newcomers.

Opposite of Animals Hate Him. See also Licked by the Dog.

This is often parodied. If the parody is clearly referencing the Disney Animated Canon examples below, it falls under Disney Creatures of the Farce, and the examples should go there. Note that, while Friend to All Children sounds similar, it isn't necessarily the same thing—and, unlike this, is about just as likely to be a male trait as a female one.

Some works actually acknowledge that the ability to befriend nearly any living thing could be a lot more Badass than it seems. It's easy to forget that the same princess whose singing summons an entire forest full of animals could, if she so chooses, send her animal friends to beat the tar out of you. Being Friend to All Living Things will sometimes also mean the person is a Fluffy Tamer, in which case they're even friends to snarling, terrifying living things.

Examples of Friend to All Living Things include:

Retrieved from "https://allthetropes.org/w/index.php?title=Friend_to_All_Living_Things&oldid=1882064"
Categories:
Cookies help us deliver our services. By using our services, you agree to our use of cookies.