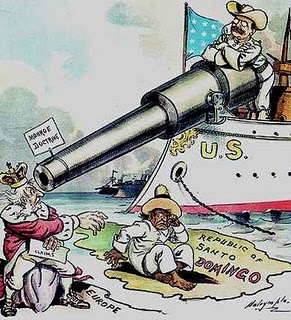 "Oh, this old thing? She's nothing really. You should see the real heat I'm packing back home."[1]

"Speak softly, and Carry a Big Stick; you will go far."

The use of a military force in a threatening manner, but without being blatant about it or actually opening fire on anyone.

For example, conducting a military exercise off an enemy's coast would be a clear example of gunboat diplomacy. The idea is to remind your enemies (and your friends) that you have a capable military force and you are willing to use it to defend your interests. Also, if the other side calls your bluff and sinks the gunboat (or you arrange a False-Flag Operation), it gives you a perfectly good Pretext for War.

Compare with: Screw the Rules, I Have a Nuke and Aggressive Negotiations. Overlaps considerably with Flaunting Your Fleets.

Examples of Gunboat Diplomacy include: