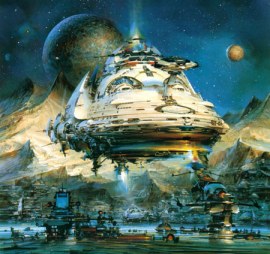 Try as you might, your ships will never be as cool as John Berkey's.

The cool ship can be a spaceship that other characters consider a piece of junk. In fact, you get extra points for junky. If you can't call it a rustbucket, though, it has to be the one and only latest, just-about-a-prototype, bleeding-edge techno-miracle.

An ancient living Precursor-craft, retrofitted with the latest techno-miracle gadgetry disguised as a rustbucket, that can think for itself... Okay, dude, quit hogging the cool.

A form of Cool Ship. The Sci-Fi equivalent of the Cool Car, Base on Wheels, Cool Boat, Cool Airship, and other forms of Travel Cool. In fact, because Space Is an Ocean, it is often heavily inspired by the Cool Boat; many spaceship types are named after equivalent water ship types. See the Standard Sci-Fi Fleet for various types.

Cool ships can even be single-seaters with no room to get up and walk around but capable of zipping across the cosmos in no time. The lack of facilities is a non-issue, Handwaved for the Rule of Cool.

To be even cooler, the cool starship may also be a Face Ship or come with escape pods, lasers, faster than light drive,[1] and transporters. If enemies try to board it, you may need to activate the self destruct mechanism.

Examples of Cool Starship include:

Retrieved from "https://allthetropes.org/w/index.php?title=Cool_Starship&oldid=1958913"
Categories:
Cookies help us deliver our services. By using our services, you agree to our use of cookies.