Jump to content
MOD: Or maybe a half-dozen categories. 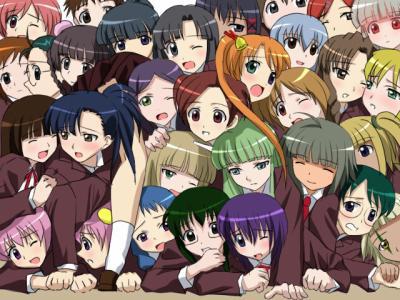 Hair Color is one of the most easily identifiable traits of an individual. The color and style of a person's hair is one of the first things the brain uses to identify who we are seeing. (This is why we tend to confuse people who have similar hair styles and color). Because of this, hair color is often used in media to distinguish different characters. Over time, specific hair colors have gained associated symbolism.

In Western media, female, blonde characters have two major symbolic associations: Hair of Gold and Dumb Blonde. Brunettes are Brainy. Fiery Redheads are Hot-Blooded. There are some others too. Tall, Dark and Handsome tend to be preferred as leading men. Blond Guys Are Evil. Some of these are rarer than others, and none are hard and fast rules. Blond and red are particularly stereotypable, since most humans tend to have either dark brown or black hair.

In Eastern media, hair colors are usually treated differently than in the West. This is simply because there are not many blonds or redheads in Asia. For example, in Japan, blonde hair is associated with delinquents, because Japanese delinquents tend to dye their hair blonde.

The increasing global nature of media is causing Western and Eastern tropes about hair colors to mix. For example, Fiery Redhead was a Western trope, but it is now used in Japanese Anime. This may be because it already fits with other Eastern tropes such as Red Oni, Blue Oni.

Animation provides even more options than the typical blonde, red, and shades of brown and black. Western Animation has usually stuck to more natural colors, while occasionally using slight variations that work better in the medium; such as using dark blue or purple to highlight black hair, or using light blue instead of gray. Japanese Animation, however, has decided to use a far greater variety of hair colors than can be explained by nature. After all, You Gotta Have Blue Hair. For a further discussion of Japanese Anime and Hair Colors, see Hair Color in Japan.

If you're looking for less-troperiffic information, The Other Wiki has pages about various hair colors: Black, Blond(e), Brown, Auburn, Red, and Titian. Even they admit that You Gotta Have Blue Hair.

For black, brown and dark hair

For other hair colors

Retrieved from "https://allthetropes.org/w/index.php?title=Hair_Colors&oldid=1891782"
Categories:
Cookies help us deliver our services. By using our services, you agree to our use of cookies.