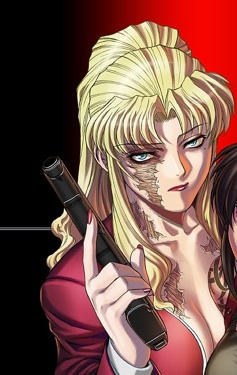 This is the female version of Blond Guys Are Evil. It sometimes overlaps with Evil Is Sexy.

These are blondes from societies where the hair color occurs naturally. The characterization differs when the blond hair is a clue that the character is an evil foreigner.

Often contrasted with a dark-haired heroine—as the Femme Fatale or Alpha Bitch compared to the Girl Next Door, The Vamp rather than the Damsel in Distress, the City Mouse rather than the Country Mouse.

She is not too likely to be the Dumb Blonde, but can be, with her plotting being run more on animal cunning than cleverness, and many evil blondes have exploited the Dumb Blonde stereotype.

This hair color can be dyed and often is. In the City Mouse, this is part of the luxuries of the city. For the Femme Fatale or The Vamp, it is a calculated part of her scheming. And it can, for any evil blonde, be a symbol of her deception or her lack of simplicity. Indeed, this may drive this trope's interchange with Hair of Gold, a deeply Cyclic Trope.

When blondes are natural, blondness does correlate with youth (and, presumably, innocence) and so is attractive. Women therefore dye their hair blond. But after a critical mass of blondes have dyed hair, it no longer correlates with youth. And it certainly doesn't correlate with innocence; the honest brunette who does not dye her hair, perhaps because she is not scheming to get a man, appears more innocent. Therefore, blond hair dye falls out of fashion and then blondes are once again mostly natural blondes and so the correlation reoccurs—restarting the cycle.

All inversions belong in Hair of Gold. Compare Blondes Are Witches (showcasing the prevalence of giving magical women blonde hair)

Examples of Blondes Are Evil include:

Retrieved from "https://allthetropes.org/w/index.php?title=Blondes_Are_Evil&oldid=1951663"
Categories:
Cookies help us deliver our services. By using our services, you agree to our use of cookies.