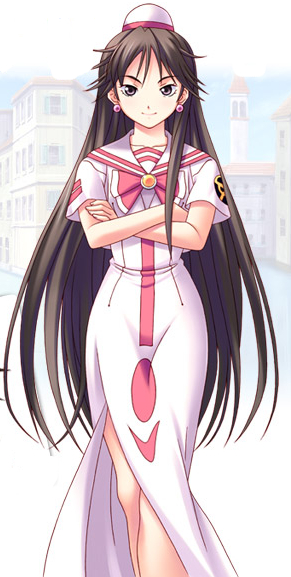 Akira from Aria, who went from pre-teen tomboy to looking this good.

She's tall, pretty, aloof, and composed. As a result, she generally attracts quite a following wherever she goes. She usually has waist-length dark hair. If she's unusually pale, she might also have Raven Hair, Ivory Skin. Usually, but not always, a Statuesque Stunner.

While it might not be fair to say that trouble follows her everywhere, it's accurate for most cases of the type. This sometimes causes an undeserved reputation as a delinquent (a notable example is Madoka Ayukawa from the manga and anime series Kimagure Orange Road).

Often the target of one or more Schoolgirl Lesbians. If she is one herself, expect her to have a more-or-less Moe or Shrinking Violet girlfriend.

The term was coined to describe Azuma Hazuki of Yami to Boushi to Hon no Tabibito, playing on the old description of a man as "Tall, Dark and Handsome". However, this is not a purely physical characterization; the aloofness is a key aspect of the trope.

This character type crosses over rather regularly with the Ojou, Kuudere, and occasionally the Tsundere. Feel free to compare the examples.

Examples of Tall, Dark and Bishoujo include:

Retrieved from "https://allthetropes.org/w/index.php?title=Tall,_Dark_and_Bishoujo&oldid=1871606"
Categories:
Cookies help us deliver our services. By using our services, you agree to our use of cookies.